The Nature of Being

rethinking the facts of life

As most people notice, typing in certain keywords into Google can spark unusual results, depending on what you start with. Out of curiosity, I started with “Jane Goodall” to see what would follow this search. The first suggestions included “facts, biography, quotes, movie, quotes, institute” and so on. To no surprise, other suggestions also came up, such as death (Jane Goodall is still alive and will turn 82 this year), Canada (she was born in the UK), costume ideas, middle name, merchandise, and other interesting topics. Unfortunately, the words feminist or female scientist weren’t in the top searches. 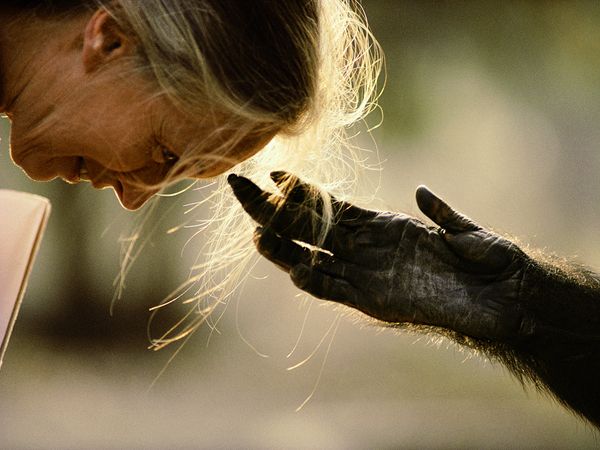 Jane Goodall, born on April 3rd, 1934 in London, England, is most noted for her work with chimpanzees in Tanzania (1). Her mission in life is to understand, educate others on, and protect the animal world, mostly concerning that of the chimpanzees. This raises a question, however. Was Jane successful because of the hard word she contributed to the animal world? Or was she successful because she was a female working in a male-dominated scientific field?

Jane explored the forests of Tanzania at the age of 26. This was an insanely huge leap of faith on her part, seeing as she was a female scientist embarking on such a journey in 1960. She was young, a woman, had little experience, and was going into the wild to document chimpanzees. All of the odds were against her. “But ‘Jane’ is even more determined. Goodall is called by the familiar first name constantly, marking her status as girl, even while she is engaged on a quest that will change the definition of man.” (2, pg. 180). This quote, taken from Haraway herself, struck me because it shows just how Dr. Goodall was perceived. All she was was a girl embarking on this journey to change man. It makes it sound like she was biting off more than she could chew because all she was was a girl. She wasn’t a scientist, a college graduate, a researcher, an explorer; simply a girl. Since when is being a girl such a bad thing anyways?

After her first film, “Goodall returns to National Geographic’s Gombe with a husband and a Ph.D. The double change in status to married women and a credentialed scientist was first announced in the National Geographic magazine, in ‘New Discoveries among Africa’s Chimpanzees.'” (2, pg. 183). I find it interesting, but at the same time frustrating, that her status as a woman had to be noted in National Geographic. I also noted that this quote used her last name instead of her first name, Jane. Did marrying and receiving her Ph.D change the fact that she was a ‘girl’? She got married, so what? People get married all the time. They were now called the “husband and wife team” (2, pg.183). It is frustrating that a woman, one as esteemed and successful as Jane Goodall, can’t be seen as successful on her own. Instead of being seen as an individual anymore, she was grouped with her husband as part of a team. Don’t get me wrong, marriage is a beautiful thing and it should be celebrated, but Jane was plenty successful on her own; she was successful without being seen as half of a team.

In my opinion, Dr. Goodall was doubted at first. From the eyes of the public, she was a naive ‘girl’ going into the wild and getting herself into a journey that was destined to fail. On the contrary, however, Jane, this outstanding ‘girl’ proved to be one of the most influential scientists and researchers the world has ever seen. If Jane would’ve done the same exact work in today’s world, she would have been noted as a feminist, as a woman standing up for women in the field of science, and she would have been applauded for her efforts. I think that no matter what time period a woman contributes to the world of science, she should be recognized accordingly. Her work is no less worthy because she is a woman. Her work should always viewed at the same level that a male’s would be. Since when did being a woman being a hindrance to your intelligence or worth?